The following article was originally published in Adweek.

Cancel culture—the process of cancelling, calling out, calling in and/or boycotting a person, brand or company on social media—has reached a crescendo in recent months. Even if you’re unfamiliar with the term, you’re likely to know a brand or public figure that has been cancelled for their offensive actions — Papa John’s, Ellen DeGeneres and J.K. Rowling, just to name a few.

From the removal of Confederate monuments to the rebranding of offensive sports team names and hundreds of examples in between, unprecedented levels of participation in cancel culture have helped organic movements rapidly achieve their desired outcomes in ways we’ve never seen before. This should have marketers worried. An effort to cancel a brand can ignite and spread instantaneously, causing reputational harm and major business implications.

How can marketers best avoid damage and distress that may occur, especially if it’s a result of misrepresented or erroneous information? We analyzed nearly 755 million tweets from more than 4 million people calling for brand cancellations to find out. Our nonpartisan examination of the cancel culture phenomenon revealed four key insights to help inform marketing plans today and in the years ahead.

Modern social pressures have fanned the flames of cancel culture.

Though the term “cancel culture” became prominent this past summer, boycotts or angry protests are nothing new. What is new is that social media and cultural pressures over the past year seem to have sparked a burgeoning cancel culture phenomenon.

A straightforward comparison of all 2019 cancellation conversations to all 2020 cancellation conversations shows a staggering year-over-year increase of more than 52% of total tweets and unique authors. This may be due to COVID-19 lockdowns, social isolation and the fear and malaise in society. What’s more is that the average number of tweets per cancel culture contributor remained roughly equivalent at about 1.7 tweets per person. This indicates that the growth of cancel culture is not driven by the same number of people, but more people are participating at the same rate.

Whether caused by the growth of social media or the increased divisiveness of American society, cancel culture is here to stay — and may only get worse. Marketers should strive to always be on the just side of culture, as well as be inspired to take action and precautions that ensure their brand has strong equity and is well positioned as a trusted brand citizen. Take time now to evaluate and understand the relationship between your brand and your audience and ensure your brand purpose and values are embodied in your brand’s actions. This can be done through the development of a robust brand citizenship framework, which clearly defines and translates a brand’s purpose and values into real-world communications and behaviors.

Cancel culture is not unique to any political affiliation.

A sweep of cancel culture opinion articles and online conversations would have you believe this phenomenon belongs to a political affiliation or ideology. However, our examination of more than 3 million Twitter users participating in cancel conversations over the last two years shows the practice transcends political spectrums. By evaluating these Twitter users’ political affinities based on who they follow, findings suggest a nearly equal split of liberals and conservatives in both total mentions and unique authors (with conservatives having a slight edge). But given the sheer volume of conversations, it’s difficult to get granular on the sentiment of all the tweets. 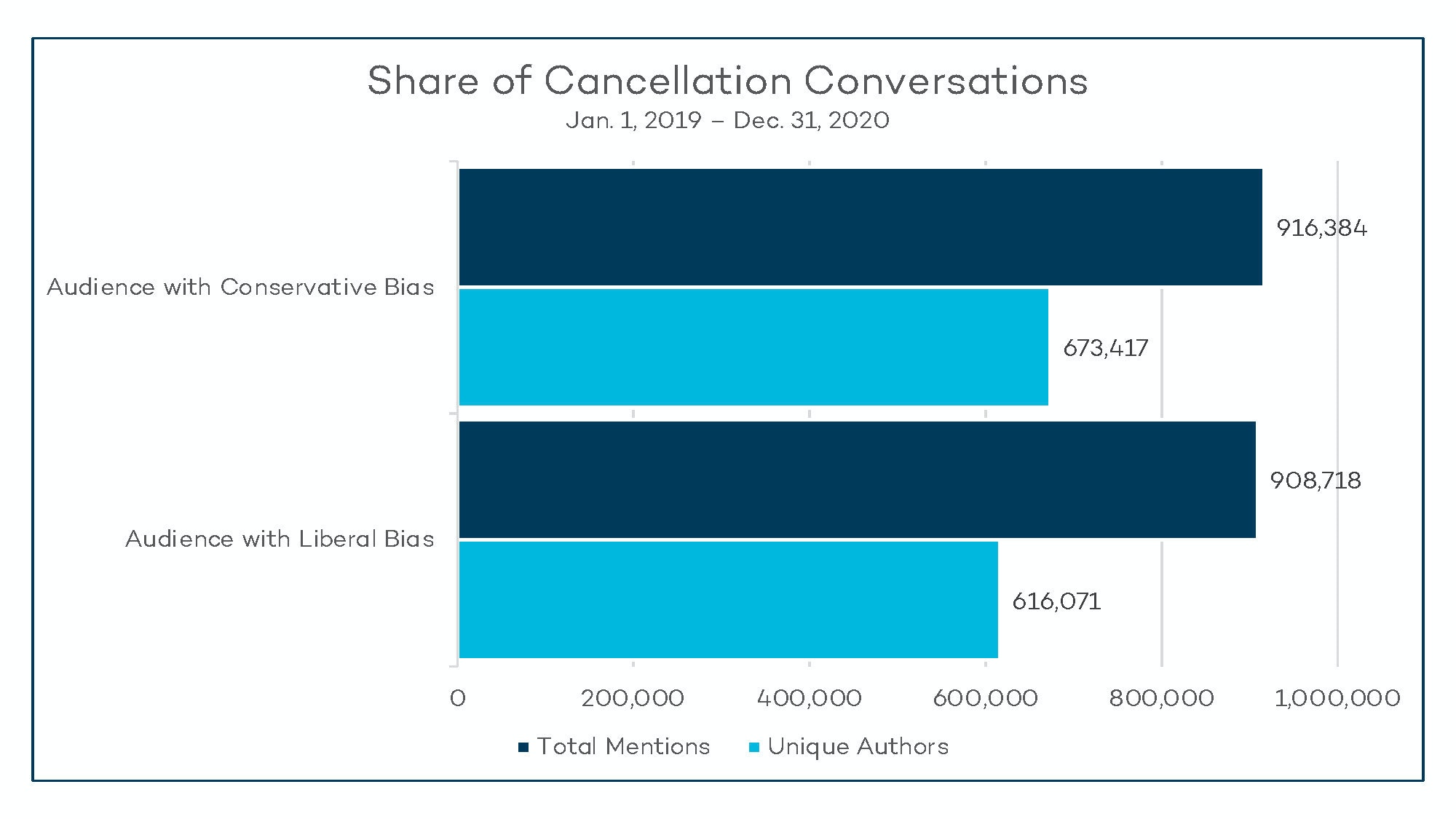 Every brand is a potential target for cancel culture, regardless of whether its stakeholders are conservative, progressive or apolitical. Your brand citizenship framework should address all issues important to your audience, making sure a brand’s actions are grounded in genuine human needs and interests. Also, while owning and sharing your purpose may alienate or provoke a negative reaction from some audience segments, keep in mind that silence has significant reputational risks.

Cancellation can be a threat on a near-constant basis. 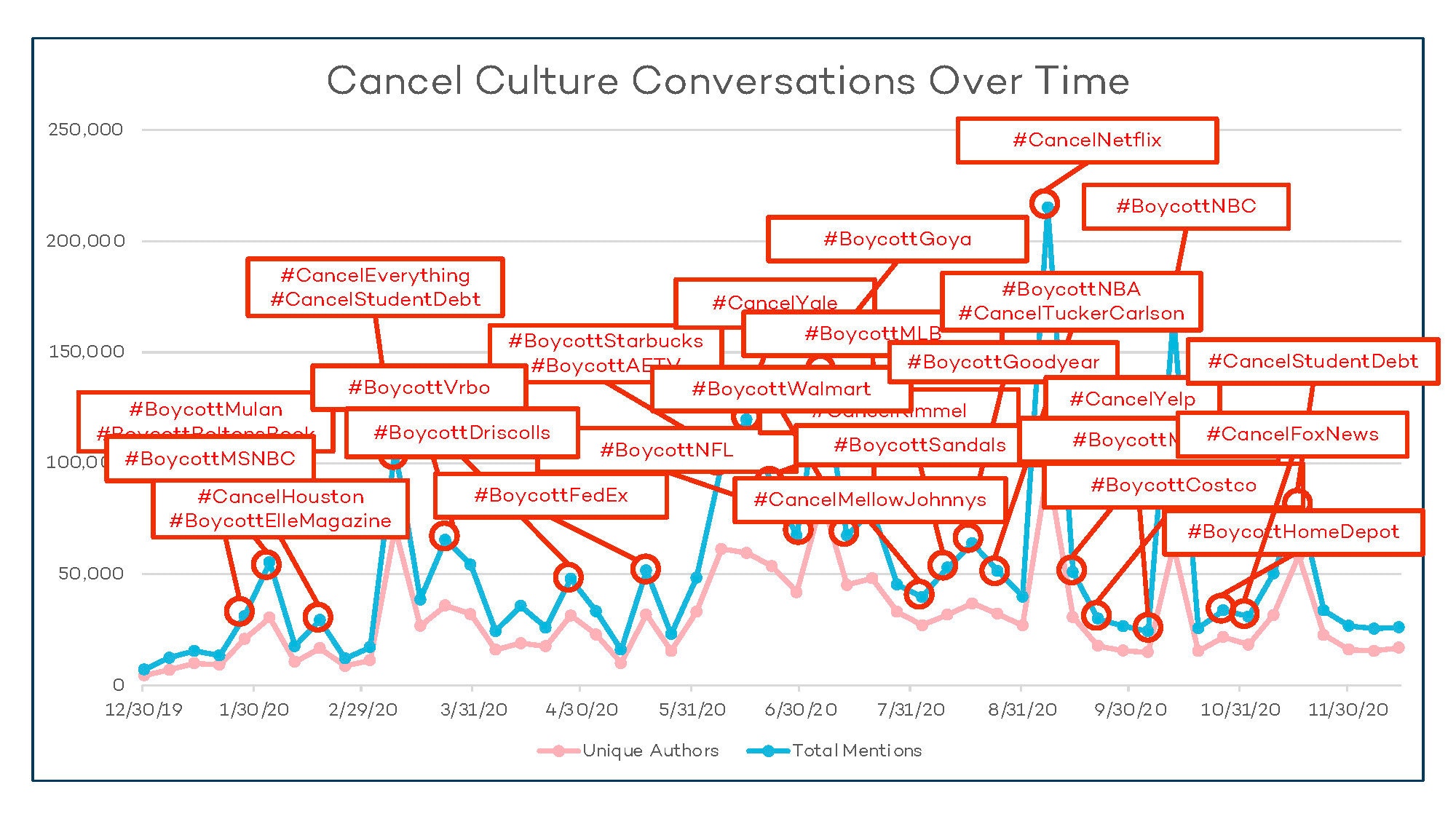 There’s an obvious correlation between the size of a brand and the amount of social discussion it generates, but the list of canceled brands doesn’t just include Fortune 100 companies. It also includes much smaller brands, such as Mellow Johnny’s, a 13-year-old Texas bike shop thrust into the national spotlight, which received thousands of angry mentions, replies and #CancelMellowJohnnys tweets within a matter of days. The backlash resulted when Mellow Johnny’s stopped selling bikes to the Austin Police Department after seeing them used to control racial justice protests.

This means there’s no time for nuance or deliberation, no complaints to 1-800 numbers and no discussions with in-store managers. Cancel culture goes from zero to 100mph in the blink of an eye. Marketers should engage in thoughtful social listening and analysis to hear, understand and be prepared for relevant fluctuations in cultural conversations. And a reactive process of actions and communications should be planned in advance to order to act wisely and strategically in the moment.

Cancellations are short-lived but pack a punch.

Nearly every week seems to bring a new cancel culture target, which seems fleeting and assumes the best brand response is simply to weather the storm and wait for the wheel of internet justice to land somewhere else. Yet an examination of #CancelNetflix, 2020’s biggest brand cancellation, proves otherwise.

The #CancelNetflix uproar was ignited by controversial promotional material for the film Cuties, a French coming-of-age drama. While the lifespan of #CancelNetflix was short — it peaked at 42,426 tweets on September 10 (becoming Twitter’s top trending topic) and dropped below 500 tweets by September 18 — the effects were lasting. On Twitter, net sentiment took nearly two months to recover. A Change.org petition received more than 600,000 signatures, a Texas grand jury indicted Netflix over claims of child exploitation and several federal lawmakers called for a Department of Justice investigation into the company.

There were also major business implications. While other factors were likely at play, the stock price dropped more than 7% during #CancelNetflix and took almost a month to recover. And people took action when Netflix cancellations increased 800% following the film’s Netflix debut. And total new subscribers were 1.2 million short of Wall Street expectations that quarter. In fact, that was the lowest number of quarterly new subscribers over the prior four years.

Cancel culture’s possible dire impact should be prioritized and taken very seriously, but it can also bring opportunity and inspire brands to do better. Developing a brand citizenship framework and an accompanying communications plan will help marketers neutralize reputational threats (especially if they are not valid) and nurture credible advocacy. A brand’s actions done well may strengthen relationships in the long run.